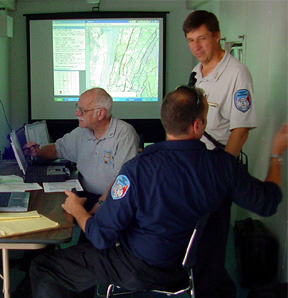 Firefighters in the command bus. Information from the Pegasus™ weather station is being utilized to generate a plume diagram projected on the screen.

Assistant Chief Bill Fitzpatrick described how they use their weather equipment, "One of the Primary hazards facing the City of Yonkers HazMat Team is the Chlorine stored at a local reservoir. Chlorine is a heavier-than-air toxic industrial chemical. With the use of the Pegasus Flyaway Kit we can predict where a toxic vapor cloud may be heading. Thus enabling us to identify the areas of high exposure. Used in conjunction with wireless air monitoring equipment we can predict and verify the spread of the toxic vapor cloud."

"We use the Pegasus portable weather station with two receivers," he continued. "The first hooked up to the stand alone monitor which gives us up-to-the-minute weather information. The second receiver is hooked up to one of our laptops."

The laptop runs the latest version of the CAMEO (Computer Aided Management of Emergency Operations) program. It automatically receives the real time weather information into CAMEO's ALOHA (plume model dispersion program) and creates an overlay on MARPLOT which projects a footprint of the effected area over the map.

"While we could utilize these programs without the weather station by manually entering in the weather information, this would not update plume model data automatically as it does with the receiver feeding real time weather data into our system," stated Fitzpatrick.

Yonkers HazMat Team recently used the Pegasus portable weather station in a four-day drill in conjunction with eight other fire departments. Fitzpatrick emailed the results: "The weather station functioned flawlessly with the interface with CAMEO and our new laptops. On behalf of the City of Yonkers and our HazMat Task Force, I would like to thank you (CWS) and your customer service staff for making our HazMat demonstration go off without a hitch!"