IT Resource Center for Homeland Security: University of Louisville, Kentucky 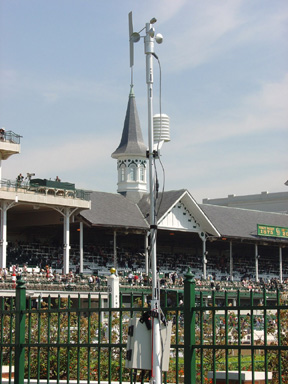 James Graham is Director of the IT Resource Center for Homeland Security at the University of Louisville, Shelby Campus in Kentucky. He is also a member of the Metro Louisville Crisis Group, a counter-terrorism organization consisting of over forty federal, state, and local agencies in collaboration to prepare for and respond to WMD terrorism.

After seeing the Pegasus Portable Weather Station at the Kentucky Emergency Services Conference in Lexington, Graham expressed interest in trying it out to see how the system would integrate with their mobile tactical system being developed with federal Homeland Security grant funds.

The trial run was scheduled for two events. The first event was "Thunder Over Louisville" -- the world's largest fireworks and air show drawing over half a million viewers. Two weeks later the mobile tactical system provided support for the police command center at The Kentucky Derby.

Following these events, Graham reported, "The Pegasus performed flawlessly in our research projects for both the `Thunder Over Louisville' event and our support for the Kentucky Derby." He looks forward to demonstrating its capabilities for the Departments of Defense and Homeland Security.