Looking for a gift for the weather buff in your life? Or a 2012 calendar for yourself?

Check out the photos in this calendar by Tyler Mode, member of the Oregon Chapter of the American Meteorological Society. The calendar features beautiful scenic shots including interesting sky and meteorological phenomena. Tyler uses the money to help fund his storm chasing expeditions -- a cause that resonates with any weather buff.

You can see and purchase individual images on the SmugMug website. To order a calendar, contact Tyler directly: weathercrazy82@yahoo.com or call 360-356-4888 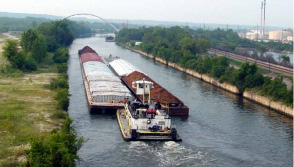 The new version of our proprietary WeatherMaster Software offers some significant "under-the-hood" improvements.

CWS participated in the Oregon AMS annual Winter Weather Forecast Conference held at the Oregon Museum of Science and Industry. Conference photos and presentations are posted on the website: http://www.ametsoc.org/chapters/oregon Be sure to catch the video of George Taylor's La Niña forecast set to the tune of "My Girl."

New this year was an afternoon session of meteorology presentations:

Jeremiah Pyle of NOAA/NWS covered the dual polarization or polarimetric radar recently installed along the Washington coast at Langley Hill and Portland. The new technology compares the vertical and horizontal reflectivity to determine the uniformity of objects. This will allow for better snow level detection, improved radar rainfall estimates, and improved detection of hail cores in storm cells.

From the University of British Columbia, doctoral candidate Wolf Read, aka “Storm King”, presented his current research regarding Pacific Northwest diminishing windstorm frequency and the relation to the Pacific Decadal Oscillation. 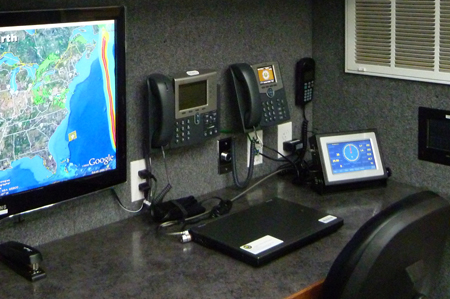 This color Weather Display Console was recently spotted in the FAA's (Federal Aviation Administration) new Emergency Communication Shelter which was on display at the Air Traffic Control Association Expo.

Thanks to Gabi Cohen of Sigmatek Advanced Technologies Ltd. for sending this photo. Gabi notes, "I checked with the FAA engineer and he was pleased with its performance."

In a move toward increased cost-efficiency, the Capricorn 2000EX Weather Station will completely replace the older Capricorn 2000 model weather stations. Columbia Weather Systems will no longer be selling Capricorn 2000s.

"As higher-tech sensor technology has become more available, we have been phasing out our flagship wind-sensor design," said CWS president Nader Khoury. "We will continue to assist Capricorn 2000 customers with repairs and replacement parts, as well as technical support." 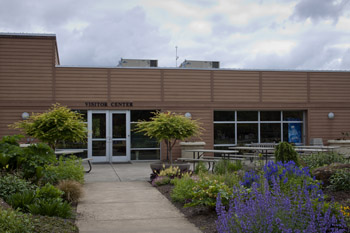 Ten Capricorn 2000 EX™ Weather Stations form an Environmental Monitoring Network operated by the Oregon Department of Agriculture. One weather station is situated at the Oregon Garden in Silverton. This summer, CWS president and amateur photographer Nader Khoury visited the garden. We've uploaded a few of his photos to our Flickr page. 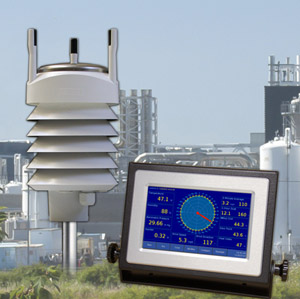 The Orion 420 is used in facility management for companies such as Intel, DuPont and Bechtel.

There are times when it may be necessary to return a portion of your weather station for repair. We recommend saving the shipping box. Apparently one overseas customer didn't think that was necessary.

In the event your weather station is damaged and needs to be returned, please contact Columbia Weather for an RMA (Return Materials Authorization) number. We will attempt to troubleshoot your system and help you determine which component to send.

And please be sure to ship it in protective packaging including an appropriate box and antistatic packing material. 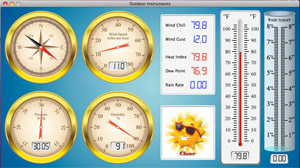 "We are pleased to provide Mac weather enthusiasts with support for the Capricorn 2000EX weather station," said Boisy Pitre of Tee-Boy. "Columbia Weather Systems readily provided their support and expertise in adapting their station to WeatherSnoop, and we're happy to partner with them." 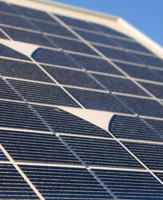 Solar panel temperature affects maximum power output - generally, the warmer the solar panel, the less power it can produce. In an industry that focuses on energy efficiency, panel temperature is a critical parameter to monitor relative to performance. 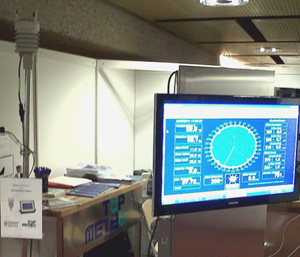 We welcome Top Meteo of Italy as a new dealer. Owner Jonata Giorgini and sales manager Patrizio Turri visited our offices this spring looking for professional-grade weather stations to round out their product offerings.

Top Meteo signed on and got their website up and running just in time to exhibit in Geneva at Meteo Hydex 2011, the World Meteorological Organization's exhibition of meteorological and hydrological instruments and equipment.

Their booth displays Weather Master Software™ on the big screen with the Orion Weather Station™ demo model which is available to dealers for trade shows and demonstrations. 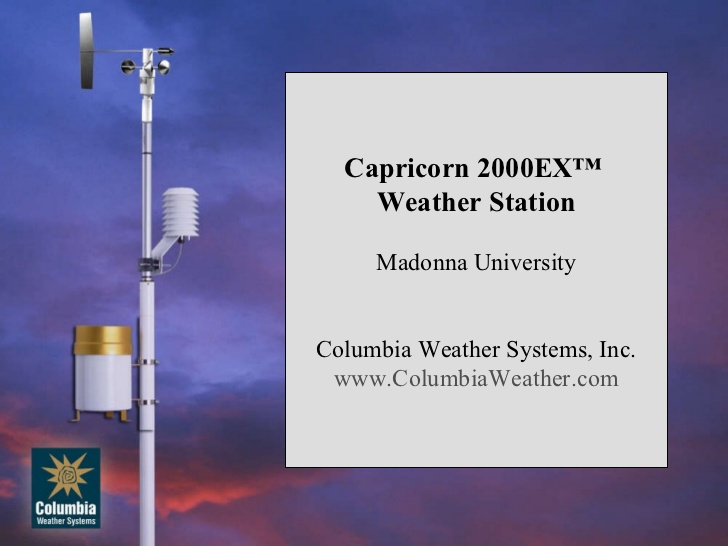 When Madonna University purchased a Capricorn FLX Weather Station, Professor Asaad Istephan requested a PowerPoint® presentation to help spread the word. We created this one to highlight all the features of their configuration which includes a Weather MicroServer and WeatherMaster Software.

While it is our business to be cutting edge with weather monitoring technology, it is tough to keep pace with ever-changing social media. Today we are learning about SlideShare, a free website/application for sharing slide presentations on the Internet as well as embedding them on your own website. Check out our results.

While you're here, another item to check out is our new application page: Responsive Architecture featuring LumenHAUS. 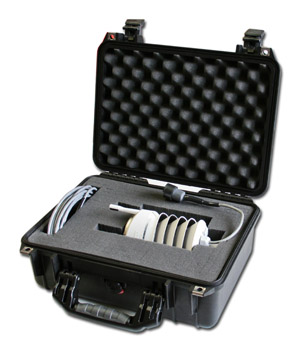 No matter how rugged the housing, meteorological sensors are sensitive electronic instruments. A Sensor Protective Case can help protect your sensor head in the rough environment of an incident response vehicle.

(shown with Orion sensor head and cable, not included)

Wind damage in and around Dixon February 19 from supercells thunderstorm with strong meso. No tornado reports confirmed, but a lot of funnel clouds were witnessed.

The pictures show the kind of weather we have here. 80+ mph as measured by your equipment. Keep up the good work! I am glad we went with your equipment -- just as good if not better than surrounding ASOS systems. 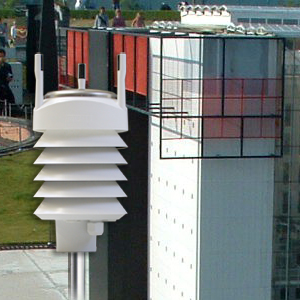 All weather stations manufactured by Columbia Weather Systems can now be integrated into PROFIBUS®, PROFINET® and LonWorks® networks.

Interoperability is critical in many applications where weather monitoring is one component of a large automation control system such as process control, building or industrial automation,

Adding these popular communication options allows managers invested with these systems to optimize their use of meteorological data for environmental monitoring and device control.

Free weather curriculum for grades K-12 is available online thanks to meteorologist Jim Witt. The WeatherWiz program teaches students to use freely available information to make forecasts like professional meteorologists.

This week, Witt will receive a special award from the American Meteorological Society: "For innovative leadership in teaching high school meteorology, mentoring, and inspiring his students to accomplishments in the meteorological community and in life."

Offering long-range forecasting services, Witt is dedicated to education and charity. Each year he offers a Hudson Valley Weather Calendar which has raised over $2 million for the Hope for Youth Foundation.

Congratulations to Jim Witt and the other AMS Award Recipients!

The new console contains an industrial-grade, 7-inch WVGA LCD touchscreen panel and is powered by a Single Board Computer with a 200MHz ARM9 CPU.

A singular advantage is the addition of Ethernet connectivity. The Weather Display can connect directly to a weather station with the serial port orconnect to a Weather MicroServer over a network utilizing an existing Ethernet infrastructure - no extra wiring. The MicroServer configuration also allows for data from one weather station to be monitored from multiple display consoles at various locations.

The main viewing screen can be factory-customized for special industry-specific requirements.

The new display works with any CWS weather station and is available in three formats: desktop, 19" rack mount, and panel mount.